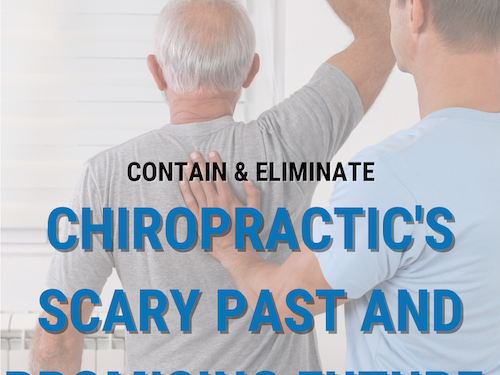 Contain and Eliminate: Chiropractic’s Scary Past and Promising Future

A Story Unknown by Many

Less than six decades ago, mainstream medicine plotted to completely eradicate the chiropractic profession. Verbiage in documents from the American Medical Association (AMA) utilized the terms ‘contain and eliminate’ to describe their goals of destroying the existence of chiropractic practice.

Just as riveting as a cloak and dagger film, the contain and eliminate campaign was complete with a media conspiracy including high-level personas like the Ann Landers national news column and publications like Consumer Reports that spread lies to the public.  Political angst, threats against chiropractic physicians and a conspiracy informant/mouthpiece called ‘sore throat’ that used a voice synthesizer to communicate with stakeholders, were all part of an elaborate plot to destroy the profession and cheat the public from accessing chiropractic service.

During that time the AMA actually established a ‘Committee on Quackery’ with the specific goal of demolishing the existence of chiropractic care. Colorful and untruthful language like ‘marginal, quackery, deviant, uneducated, cults, rabid dogs’ among other adjectives were used to try to dissuade the public from visiting chiropractic providers who offered effective drug-free health options.

The ongoing antitrust lawsuit that ensued (Wilk vs. AMA) was a fascinating 14-year journey that changed the face of healthcare and ensured the 21st century health options that we all enjoy today.

The practice of adjusting the spine has been implemented for thousands of years. The earliest known medical text, the Edwin Smith papyrus, describes the ancient Egyptian treatment of bone-related injuries from as early as 4000 BC. There is evidence of tissue work and bone-setting in ancient Asia circa 2700 BC. Most referenced, however, is the Greek physician, philosopher and scholar Hippocrates, who lived from circa 460-370 BC and saw the significance of the spine and its associations with health and disease.

Hippocrates was historically dubbed ‘The Father of Medicine.’ He was the creator of the Hippocratic Oath which retains a standard of timeless morals and values that is expected of new physicians, medical doctors, chiropractors and others, as they recite a pledge that he/she will uphold professional ethical standards that support the best interest of patients. The current modernization of the Oath, the Declaration of Geneva and Lasagna’s Oath are all pledges used by a majority of new health providers and are foundationally based on the philosophies of Hippocrates.

In 1895, the modern profession that we currently call ‘chiropractic,’ historically also called ‘bone-setting,’ was formally founded in the western world by D.D. Palmer. From the root words chiro meaning ‘by hand’ and practik meaning ‘practice of,’ chiropractic understood the significance that Hippocrates and the ancients attributed to the neuromusculoskeletal system.

Though the appearance of the first apothecary in history was in Baghdad in 754 AD, the practice of medicine as we know it today did not see an emergence until after the Industrial Revolution in the 18th century.  Similarly, the founding of the chiropractic profession in 1895 should have concluded the story of a natural and reasonable transition from an ancient practice into a modern profession.

Sadly, the well-being and choices of patients was not the first priority of all healing arts practitioners. The success of chiropractic in the U.S. turned out to be a long fight for the basic rights of doctors of chiropractic (DCs) to practice as well as a fight for retaining the rights for patients to choose the most appropriate care options for themselves.

Diverging Paths and the Right to Practice

Many events happened in the early 1900’s, including the discovery of penicillin in 1928 by Alexander Fleming which led to the introduction of antibiotics to combat infections. A single-vision focus on new pharmaceutical interventions also led to a profound divergence in health philosophies that should have been working together.

These included a medical/pharmaceutical path that focused on drugs for treatment and a natural path that utilized innate organic approaches to health. Though these systems, in theory, should collaborate synergistically with a focus on the best outcomes for patients, that didn’t happen. The potential for production and money-making shunted big dollars and influential business interests down the pharmaceutical path.

Spanning decades in the early 1900s, hundreds of DCs chose to go to jail, rather than accepting the accusation of ‘practicing medicine without a license’ and paying unjustified fines. DCs were not prescribing medicines, but simply engaging in the care of patients like they always had, optimizing the joint function of the spinal column. Through threats and persecution, DCs continued to practice. D.D. Palmer himself spent 23 days in jail in 1906.

Despite the conflict, the success and popularity of chiropractic care was steadily growing, as were the numbers of doctors of chiropractic, especially in the state of Iowa. Their success logically led DCs to seek recognized legislation for equity with other health professions. At the time this request was seen as a threat  and the Iowa State Medical Society fought vehemently to stop them. Finally in 1913, after long hardships in many states, Kansas was the first state to  establish a chiropractic board and state licensure procedures for doctors of chiropractic. More states swiftly followed their lead.

During this process, the  AMA became intrigued with the state battles. The AMA was striving to recover from debt and was concurrently concerned about a ‘radical socialistic’ political idea called ‘Medicare.’  The natural approach of chiropractic was seen as a competitive danger to the AMA because there was a ratio of 1 to 10 (DCs to MDs) across the country and in states like Iowa, a ratio of 1 to 4 was a disturbing fact for the AMA that caused alarm at the national level and led them to engage in a campaign of slander.

What if you couldn’t visit the healthcare office of your choice?

Nearly 130 years after the founding of the modern profession and over 30 years after the court victory of Wilk vs. AMA, DCs are widely recognized as primary health providers. In the U.S. today it is estimated that over 70,000 licensed doctors of chiropractic are in service to the public providing a natural approach to care for more  than 35 million Americans (adults and children) annually. According to the U.S. Bureau of Labor Statistics, “…employment for chiropractors continues to swiftly expand and is projected to grow 11% from 2020 to 2030, faster than the average for all occupations.”

Along with the understanding of the basic human rights of patients to choose a treatment path and/or a team of providers to work together in their best interests, it is crucial that patients and new doctors promote care that puts the patient first, remember the powerful history that afforded us our rights and, sadly, be aware of the old prejudices that may still exist in some circles.

The story of the Wilk vs. the AMA lawsuit is profound and made the choices that patients enjoy today possible. Students of chiropractic continue to include the Hippocratic Oath during their traditional ceremonies to exemplify their commitment to individual patients. In modern practice, doctors of chiropractic work synergistically with all other medical disciplines and healing arts to address the individual needs of patients and to help patients reach their healthcare goals, naturally.

The detailed story of ‘Contain and Eliminate’ has been told with a book and webinar series written by individuals who lived, worked and litigated during this ground-breaking case that changed our healthcare system. The story has also been told on the Adjusted Reality Podcast where host, Dr. Sherry McAllister, interviews Dr. Lou Sportelli.

For more information and details about this case and the powerful history of the chiropractic profession please visit: https://www.ncmic.com/resources/webinars/contain-and-eliminate-a-history-of-.