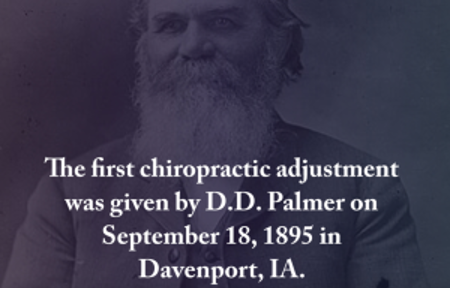 September 18, 2020, marks the 125th birthday of the chiropractic profession! To celebrate the occasion, we thought it would be fun to take a brief look at the history of chiropractic care and how it all came to be.

Our story begins in 1895 in the small town of Davenport, Iowa. Daniel David Palmer, known to his friends and colleagues as “DD,” was an enthusiastic scholar who spent much of his free time reading scientific and medical literature.

Over the course of his studies, DD made a significant realization –– for thousands of years, humans had used various forms of manual manipulation to ease pain and improve health, but no one had drafted scientific documentation or developed a philosophical rationale to explain how it worked.

Inspired, he decided to translate his studies into action. Palmer believed all systems in the body were interconnected. DD theorized that manual manipulation, or chiropractic care, could restore balance to the neuruo-musculoskeletal system safely.

Following several years of study, he decided to put his research to the test. On September 18, 1895, DD Palmer performed the first-ever chiropractic adjustment. During this treatment session, he manually aligned a vertebra. Afterward, his patient, a deaf man, noticed an improvement in his hearing.

DD took these results and continued to hone his manual treatment technique. Two years later, in 1897, he opened the Palmer School of Cure in Davenport, Iowa. It’s still there today, but under a different name, the Palmer College of Chiropractic.

Chiropractic care has come a long way over the last 125 years and we can’t wait to see where it goes next! If you’re interested in finding a doctor of chiropractic in your area, use our free online tool today.